Now, I know what you’re thinking... many of them are not even funny! Some of them are just apologies for not even making a comic! It’s you’re, not your! But I’m still really proud of this. Power of Power has been active for almost 2 years now, something I can’t say of any other of my personal projects and it doesn’t even feel like it’s been so long, but when I think about it, things have changed so much since Power of Power started... I was still on school, had a different job, I had more hair on my head, blah, blah... 100 weeks it’s a really long time. 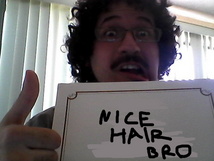 Fig. 1. Look at that glorious hair.

The thing is that I want to thank whoever is still following this webcomic and try to convince you to stay. I still have things to figure out and things to improve, but I feel I have actually learned some stuff about this crazy business; Also, I have achieved the goal of making some people smile or even laugh at my comics, some guys even translated some comics and they’re somewhere rolling on the Internet, which is kinda awesome. 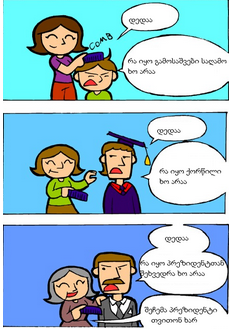 Finally, I’ve spent some time trying to figure out which of my comics are the best ones in an attempt to get better, so I looked at some data... views, how well they were received on different websites, comments, shares on social networks, friends’ opinions (they’re really tired of me at this point), etc. Well, whatever, let’s celebrate listing the best comics of Power of Power with a commentary on them, enjoy. :D

I used to rest in the grass and watch at the sky a lot... It was a nice thing to do when you and some friends had just been punched in the face by a wild test and just wanted to do nothing... Sometimes the peacefulness of the moment would be interrupted by the most random thoughts like a friend who said he didn’t wanted to look at the sky anymore, he was afraid he would fall (that’s a really weird vertigo, dude) or that time a friend asked himself why sometimes you can see the Moon during daytime and then with al conviction he said “I think there are two moons” (we still make fun of him). I guess that’s something that inspired this comic.

#11 Green Arrow Is Jealous of Batman

This one was one of my first comics to ever gain some attention. It started with my friend Palafunk, he said I had to make a comic with Green Arrow stuck in traffic and seeing a green arrow in the traffic lights or something like that. I’m not the biggest Green Arrow fan, I always thought of him as an unnecessary second Batman, so I felt it would be funny to add some background about him being jealous of Batman (who rocks a lot and has a way better theme and costume and all that). Curious thing is that I have done many Batman comics but they never really succeeded. Now, for Green Arrow fans, I know Green Arrow is also rich so he would have access to better transportation, but come on guys, it’s a joke, I gave you the Arrow Car, what else do you want?

Sorry to break your hearts, but I haven’t actually watched all of How I Met Your Mother and I don’t get most of the references to it, dishonor. But, guess what, many of my friends have watched it from the beginning and won’t stop quoting it so one day one of them, yugimotta, told me I should totally do a reference to the show and combine it with the Sleeping Beauty, and It would be legen... wait for it... dary. I’ll have to say that the only thing I contributed to this comic was the drawings and the word “pub”, which kinda ruined it, I should have used “tavern”...

Yet another “borrowed idea”, this one’s from Sweet Reichel (Sometimes we work on a comic together). She’s a med student and this dialogue did actually happen when another med friend was asking the questions, when she told me the story I found it so funny that I asked her if I could do a comic about it and she agreed. I think some people took this comic the wrong way... I’m not saying that not doing these things makes you boring, I actually feel judged when I’m being asked these things in hospitals, and what’s funnier than bad medical practice?

I did this comic for Halloween 2013, I remember the 52 Joker had just became a viral thing, cosplay, comics, memes everywhere... and it was obviously going to be a Halloween costume, so I wanted to do something with it. I wanted to include Freddy Krueger too because he fucking scared the crap out of me when I was 12 or something... I was also paying a student loan, so I just thought it would be funny to say: gore is not even scary anymore... You know what’s scary? adult responsibilities *scary gesture*

This is me and yugimotta letting out our frustration about jobs for IT guys specifically, but I think there’s something about it that it’s true for all graduates so I guess that’s why it was way more popular than I expected. I know it’s kinda sad, but let’s laugh at our misery and despair :,D

I was actually left home alone when I did this comic, dont’ worry, there was food so I didn’t starve to death and I didn’t really have to go out much to survive. I also had a lot of time alone to think and I just came up with this funny thought of me being such a helpless mess that I’ll be condemned without help from my parents, any relationship to reality is purely coincidental...

Well, see comic #6 for more information, joking. But, yeah, pretty much the same. One time I was making some quesadillas and realized that tortillas smelled funny, some of them had green dots, so I did the obvious thing to do... searched for “is mold edible ” on Google, sometimes it is, apparently (I didn’t eat mold, but interesting).

Well, comedic exaggeration always makes the trick, of course yugimotta had to do with this. We all have an older family member who wants us to teach him about technology, or maybe some clients in case of us IT guys (the printer printing green thing actually happened). It is so hard to teach this kinds of things because we use such a different language and give so many things for granted now, like: “any key” doesn’t include the power button, you silly. Remember to be patient :)

Who doesn’t like pokémon? Nobody, that’s who. I know the real idea behind the “not enough badges to train me” it’s more of a “you don’t have enough experience for this difficult case” but it sounds like the pokémon is actually checking if you have the right licence (at least according yugimotta and me). If I had to guess, I’ll say this comic was popular not only because of pokémon but also of the great amount of silliness.

This is a running gag between me and friends (OK... only yugimotta and superdaniel100), every time we see a new non-marvel movie we say “oh, now Nick Fury is coming out from nowhere to tell DiCaprio about the Avengers Initiative”, We even wanted to make a series just about it (who knows, it could happen). But Frozen was perfect for it since Elsa actually has superpowers, everyone loved it, and Disney bought Marvel and did a really cool Avengers movie, so... It was natural to think of it. Also, Samuel L. Jackson is a bad motherfucker.

I was thinking about what to do for that week’s comic while walking on a store, looking for video games and movies and stuff, I thought, I have to add some sex to Power of Power some way, but I didn’t wanted it to be some plain sex joke, that sucks…and suddenly, I saw a Norton Antivirus box and thought, who buys that damn bloatware?! I mean if it was a condom It would not just not protect you, it would CAUSE STDs! Right? There you go... This comic was popular practically everywhere I submitted it, so it won it’s place as the best comic from Power of Power until now!